Abby at Newly Impassioned Soul is presenting us with a... 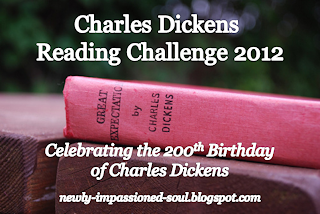 ...and although I was a little skeptical at first - I am a rather slow reader and Dickens has some very long books - I have decided to participate; after all, what is a challenge for, but to challenge a person?

The options are to choose 3, 5, or 10 books to read this year. I have chosen 3. I have a number of classics on my to-read list this year as well.

First of all, I'll be reading A Tale of Two Cities for school starting this month or the next. So the first book on my list is decided for me. I'm also supposed to write a review afterwards, which will probably make its way to this blog. 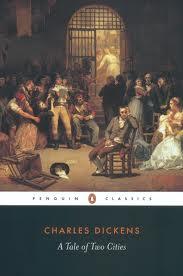 Next, I think I'd like to read either Oliver Twist or The Pickwick Papers. I haven't seen movies of either so I don't yet know the stories, and I believe they are both shorter than others; at least Oliver Twist is. Can anybody tell me which one is shorter? 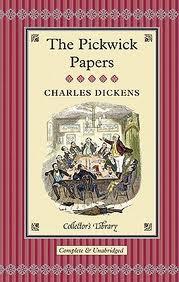 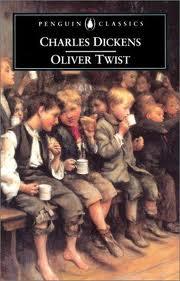 At the moment I think I'm more partial to the idea of reading Pickwick (if O.T. isn't significantly shorter, which it very well may be), mainly because I can think of three other pieces of literature that mentions it. Anne of the Island, Little Women, and Cranford.
With Cranford, I'm actually just going by the mini-series. In it, Captain Brown gave his copy of the book to Deborah Jenkyns, who apparently did not approve of Dickens, and said "I defy you not to roar!".

In Anne of the Island (third book in the Anne of Green Gables series by L.M. Montgomery)...
"Anne looked up from Pickwick Papers. Now that spring examinations were over she was treating herself to Dickens." (I always wonder if Anne read Jane Austen...)
A little later in the chapter, Anne's friend Phillipa asks what she's reading, and after Anne answers, says "That's a book that always makes me hungry. There's so much good eating in it. The characters always seem to be reveling on ham and eggs and milk punch. I generally go on a cupboard rummage after reading Pickwick."
That's always made me curious.

Then, in Little Women (the movie, at least, as I haven't read the book...I know, I know; and it's on my book list this year) the newspaper thing they make has something about Pickwick in the title. I'm being terribly unspecific here, sorry.

Thirdly, I'll either read whichever one above that I haven't read, depending on how much time I have/what other books I want to read, or one of the other Christmas novels besides A Christmas Carol (as I've already read that).

But I'm very open to suggestions!
Written by Melody

Yay! I'm so glad that your are participating in the Dickens reading challenge too! I'm a slow reader as you know but I'm making myself read and quite enjoy it!

I'm reading 'A Tale of Two Cities' first too! Be forewarned, the first chapter (after the famous beginning lines) is quite dull. But get to chapter 2-4 and there's some interest. It's one of his shorter works so that's good.

Oliver Twist is longer I think. I was looking at Dickens novels at the bookstore tonight and was surprised that Pickwick Papers was shorter. Also shorter is 'Hard Times'. Oliver Twist isn't as long as most but I think you'll be far happier trying Pickwick. Oliver Twist is a sad tale even though it is interesting.

I love the Anne quotes! She's so delightful! And I quoted Captain Brown's "I defy you not to roar!" to my sister in the bookstore tonight. :)
Yes, in the 1994 Little Women their "paper" was called "The Pickwick Papers", they all wore make-shift badges like the Pickwick Club does and they called each other by names of the gentleman in the Pickwick Club. I never really understood those literary references until after I watched the old BBC adaptation of Pickwick.

I bought a lovely hardback volume of 'A Christmas Carol and Other Christmas Stories' this evening which was on sale for $3.66! I am so delighted to have such a pretty volume which includes five Dickens writings I'd never even heard of before! So those might be my third "book", and I might just finish reading my other two books in time for a November or December reading! I'm expecting Great Expectations will take up most of the summer months as I'm such a slow reader.

Loved hearing that you're taking on the challenge! :)

I believe you will find Oliver Twist is shorter, I own the both of them and side by side Pickwick is twice the size. (Not entirely reliable, but the books themselves are the same height and width, and Oliver Twist has larger print.) Also, Pickwick rambles on and on with no particular plot. So if you have trouble reading it can be difficult to finish, I would know, I have yet to finish it. :(
Miss Laurie is right though, Oliver is a sad yet interesting story and Pickwick is the closest to nonsense, and therefore entertaining, that Dickens ever came.
Hope that helps!

"Is there anything to be had in the pantry, Queen Anne?"
"I made a lemon pie this morning. You may have a piece of it."

Yep, in Little Women they have a Pickwick Club and it's much more detailed in the book than in the movie. (No, no I won't go off on another rant about how the movie wasn't faithful enough. I promise.)

Personally, I'd recommend Oliver Twist because it's much more of a story (though it's longer). Pickwick, from what I read (not much) is mostly a collection of vignettes, with approximately 300 characters that I couldn't keep track of.

But of course that's only my 'umble opinion.

I think that you shall love Tale of Two Cities. I'm planning on reading it too, what fun! Trust me, you'll cry by the time it's over ("but you like crying over books, don't you?"
"Oh, yes... in the middle of them.")

Miss Laurie,
I have heard of ATOTC being duller at first and getting more intriguing, and so I shall certainly stick with it.
Although I have very little choice since it's for school. ha!
I enjoyed your nice long comment.

Stephanie,
Thank you for your advice!

Miss Dashwood,
I almost put that bit of the conversation, too, but, I didn't.
Ha--there's a good reason I kept remembering that spot, since I'd scanned it several times going to read that chapter before I actually read the whole book...if you know which chapter it's from then you know I am confessing...
Now, tell me what your 'crying over books' quote is from. I should probably know, and you've quoted it twice now, but I don't. =(
I'm quite sure I shall cry about A Tale of Two! I cried over the Wishbone episode. I think that's a sign. :P

Everybody,
Does Oliver Twist END sadly?

Because Oliver Twist centers around an orphan's hard life the story is fairly sad all the way through. The ending is somewhat sad because a friend dies but Oliver's life ends fairly happily with good prospects for him. I haven't read the book so I'm judging by the several movie adaptations I've seen. My dad remembers his mom reading Oliver Twist to him when he was a boy and it being very good. I think Dickens' style of writing in general makes the story lighter then it could be otherwise.

Miss Laurie's opinion on Oliver Twist sounds unprejudiced, which is more then I can say for my own opinions on Dickens. :)
I must have a guess at Miss Dashwood's quote! I believe it is still an Anne quote. Ann of the Island , I believe.

Heehee, my quote has mystified you!
It's from Anne of Avonlea, when Anne and Diana are talking about Anne's latest story "Averil's Atonement" (yep, the one of Rollings Reliable baking powder fame). Anne says she wants the book to end tragically, but Diana protests and says she likes happy endings, and thus follows my little quote.

The Pickwick Papers are SOOOOOOO long, I know that!! So I think Oliver Twist is shorter! :)

Miss Dashwood/Stephanie,
haha, I think I agree with Diana! =)
And now you say that, I actually remember that part, at least that Diana was saying the story shouldn't end tragically. ;-)

Mykaela,
Thank you for your input!

Does anyone know the name of the book which Phillipa refers to. It was about a horror story.