It has been a week since the post I did on Valentine's Day, and at present the poll results are thus: 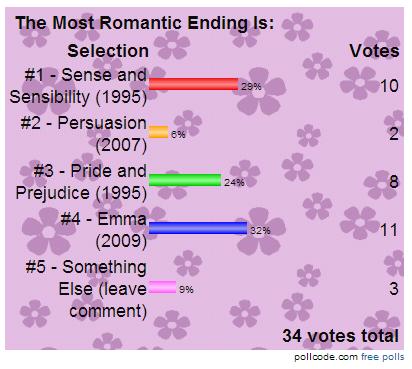 And the winner is Emma 2009! (Which is also what I voted for. :D That movie is a series of continuous delights, but it does lead up to that ending scene so beautifully!)

A close second, as you see, was S&S95 which has a delightful ending too! :)

Thanks to everyone who voted!
Written by Melody 2 comments:

First of all, I would like to wish everybody a Happy Valentine's Day.  In honor of this occasion, I am presenting some of the best endings from Jane Austen movies, so that we can all sigh over them and all that nonsense, and then vote on which one was the most romantic. I'm not sure I'll be able to decide, but it will be fun to see what you do. ;-)

To help me decide which scenes to throw into the competition here, I'm going to do five & just focus on The Endings. So, in random order--

#1
Sense & Sensibility (1995)
~This isn't supposed to involve The Proposal, so technically for the throwdown we're starting at 2:05... but if you decide to watch Edward's proposal (awww), I won't tell. (Just remember it isn't supposed to 'count'.)~

#5
Other
Due to unforeseen circumstances (called YouTube not cooperating with my plans and providing me with what I wanted) I am forced not to include a fifth video. However, I daresay you all remember JA movie endings pretty well. If your favorite didn't show up here, vote for 'other' and then tell me what you're thinking of in a comment. If enough people say the same thing, it could still win.

Also... I lied. Er, was mistaken. Because although I like them all and adore most of them, I do have a favorite. It gets me every single time-- I just sit there grinning stupidly. (And when I'm all caught up in the story it has before brought tears to my eyes. Sniffle. So touching!)

Anyways. But I shall not say which I mean, because now it is time for you to vote. I can't say I'm not going to do some gushing in the comment box, though. :D Please feel free to do that, too! I'd love to hear which one you vote for!! Polls are so much more fun that way.

What you say when you want to post, but have nothing to say...

I've seen posts like this several times, and when it comes to me--well, I pretty much ignore them. But on the chance that not everybody is like me (haha... okay, with the knowledge that not everybody is like me...), I'm doing it anyways. Because, see, I feel like posting. I look at my poor, neglected blog and think, oh, what a poor, neglected blog you are. Cute, but neglected. (Haha, is it bad that I keep admiring my own header and background?)

But then I don't do anything about it.

Because frankly, my inspiration has been on "low" for most the time ever since I finished the Jane Austen series that first got this blog moving, which was, heh, finished all the way back in October of 2011.

Low inspiration combined with laziness. When I DO have ideas, they're generally for posts that take a lot of thought and time (like the thing I'm supposed to be working on at present), so then, if I do ever finish them, they take a long time and I don't want to attempt another one for a while.

So... what would you advise? Do you have any ideas that might help me get buzzing again?
What is your favorite thing about my blog (so I can try to do more of it)? What kinds of posts do you most like to see? Is there something I don't do that you think I should?

There. If you are not like me, perhaps you'll comment and give me your opinion. :)
(Actually, I might if I had an opinion--I just don't usually like to bother coming up with one. Ha.)

And now, because this post needs a picture and something to laugh (or at least smile) about-- 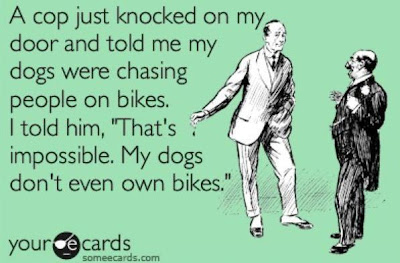