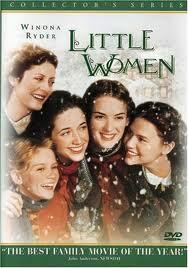 I can't quite remember the first time I saw this movie... but it was a few years ago. I enjoyed it a lot. I hadn't read the book and knew that the book must be better because it always is, but didn't end up reading it until earlier this year. Now that I have, I can review the movie with a clear conscience. Heehee.

The thing is, I'm not really used to doing movie reviews... usually I have a brief overview with all the adaptations of a particular book, but I didn't feel like doing that this time. Anyways, I definitely think this is the best version, although I've only seen two others so if you mention another one you liked, I might even be convinced to watch it. ;-) 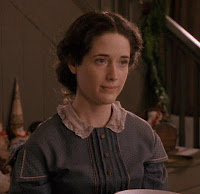 Meg. A funny thing about this movie is that for me, it's actually pretty hard to compare it to the book, and it's the same way with the characters. I mean, with a lot of adaptations of classic literature you can say "This actress completely slaughtered the character," or "This actress got her to a T!" but with this movie, none of them really like the character in the book, but they're not really unlike them either. Anyway, I actually liked Meg pretty well. The movie being a normal movie-length and not a mini-series it wasn't long enough to get to know the characters very well, but in a general sense I think it was pretty good. She seems, perhaps, even a little more... gentle, I guess, in the movie. 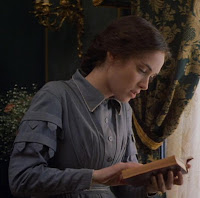 Jo. La, what to say about Jo? She's one of those endearing characters you just have to love. As far as accuracy to the book, it's the same as what I was saying about Meg. I found the actress' portrayal very delightful and not contradictory to the book, yet not the same. But looking just at the movie, which is what I should be focusing on, I liked her a lot. She was funny and quite interesting--you know, there's a lot to her. And I always find myself drawn to characters who are bookworms and writers. It's just the way things are. And she's definitely my favorite sister in the movie. :) 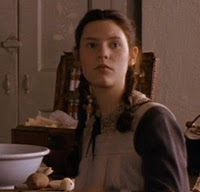 Beth. Now, I'm a little more opinionated about the book-to-movie aspect here. I did think Claire Danes was a little contrary to the book's Beth... but not in a way easy to put my finger on. I guess she just irritated me a little. And in looks I just don't think she suited her too well, but it's not like I hated the portrayal. It was just okay. By the way, in the book Jo and Beth were closest to each other, and Meg and Amy were more of a pair, too. This wasn't very obvious in the movie: especially the latter. 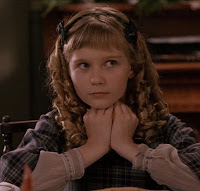 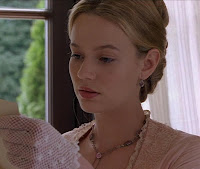 Amy. (Isn't it funny how Amy is the only March sister with a name that can't be/isn't shortened?) For her, there are two actresses who play the character--one younger, one older. (And I'm glad they did this, because it's ridiculous when they have a twenty-something-year-old trying to play a character who's twelve.) The younger one seems to be the main one, though; when it gets to the part after Meg's wedding it seems like the whole movie turns its focus almost solely on Jo (which isn't the way it is in the book), though the focus is on her most of the time anyways. I don't like her when she's older, either. Amy, I mean. When she's younger, she annoys me some of the time (and I can never forgive her for burning Jo's book, no matter what Marmee may choose to say upon the subject) but I really do like her. She's funny and cute. The other one... there isn't much of her and when she is there she just seems rather like a cold, boring person. (Though after she marries...er, who she marries; should I be trying to write this without spoilers, I wonder?--she at least seems nice.) It was much better in the book. Actually, I was pleased to find that I liked Amy altogether better in the book. But especially when she's older. 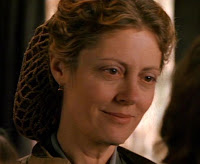 Mrs. March (Marmee). I actually liked her acting rather well. The only complaints I have would be more the fault of the scriptwriter, and I rambled about my irritation in this post quite enough that at this point it will do as well to be silent. (Er, that last part was a Mr. Collins quote... sorry.) Anyway, again, everything is more detailed and you know a lot more about characters (and in this case, the relationship with their daughters) from reading the book, but let's just assume that from this point on, shall we? 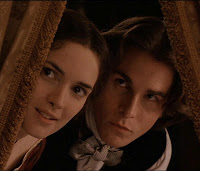 Laurie. Hmm... he was all right. He wasn't really the Laurie of the book though, and his teeth irritated me. :P He was funny, though, and of course I like that. It was fun watching him and Jo. "If only I were the swooning type!" "If only I were the catching type!" But later on, after The Refusal... arrghh. I disliked him. More, I daresay, than the viewer is supposed to. Heh. But he wasn't all bad. 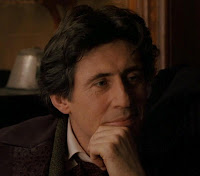 Professor Bhaer. I liked him, I really did. And then I read the book. It's the same old story. I like them both in different ways but the book's is better. I will confess, though, that there was one thing I liked better about him in the movie: the absence of a beard. Heehee. And I'll pull out the excuse not to say much about him because it might give away some of the stories for those who don't know it already. If indeed there are such people reading this. ;-)


The costumes were lovely. I enjoyed them very much--and I really liked the 'real' feel they had to them, well suited to the story. And the hairstyles and all that. A lot of Victorian period dramas I see are, of course, set in England and the people are either rich and have a lot of fancy, fluffy clothes, or they're very poor and haven't anything fit to be seen. Haha. But the Marches, in comparison with those sort of things, are more in-between. They dresses were often practical yet detailed and interesting and just nice. And then of course some of the ball gowns and Older Amy's clothes are more rich-y. 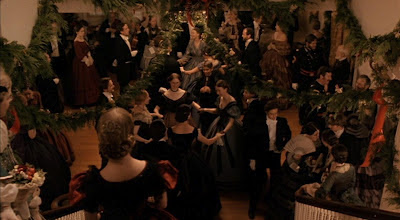 The soundtrack was also very nice. As an actual soundtrack, I don't usually listen to it by itself all the way through very much... sometimes just a few songs, mainly the dance songs. But in the actual movie I think it goes quite well, and the main theme is nice. And sort of Christmassy. I guess that's because it plays at the beginning, and the movie starts on Christmas Eve.

Ooh, that's another nice thing about this movie... it has a lot of Christmas in it! and I do love Christmas. But enough of it isn't Christmas so that you can watch it other times too without feeling guilty. Haha.

As far as accuracy to the book goes... well, it's probably more like a general overview of the story. Little Women isn't really the shortest children's classic in the world. And they did change some things, but for the most part they didn't stray from the story terribly.

As a movie, I'd probably give it an A or A-. There's something delightful about it, but it's not one of the period dramas I go crazy over. (Some of you may doubt I ever do that. It's just in my own way, you know. :P)

I hardly think a review is complete without a trailer, so here's one, but it hath Spoilers. If you don't already know the story, I wouldn't recommend watching it. Also, some trailers I just find really fun to watch and they capture the spirit of the movie they're representing... this isn't one of them. (And why didn't they use music from the movie? Instead, music from this movie is used on other trailers... S&S95, for example.) But it does include one or two of my favorite quotes. :)

That's about it! Sorry this was so long in coming, everyone. I am a very sad procrastinator at times.
Written by Melody 9 comments:

Did any of you like American Girl stuff when you were younger? Well, I did. Still am attached to them, actually, in my way. ;-) Well, I found out a most exciting thing yesterday. I heard from one of my sisters that there was going to be a new Historical A.G. doll. My first reaction wasn't too favorable; that company has done some things in the last several years that I didn't care for at all. They kept changing things, and I like keeping things traditional. And then making a doll from the 1970s and calling it historical? Come on. Girls will have moms and aunts and young-ish grandmas who were growing up then. I really doubt they would like to be thought of as historical, haha. And taking away Felicity, Samantha, and Kirsten?? Of all the nerve! Those were some of my favorites.

But then I found out the year the new character was from: 1812.

Suddenly I was MUCH more enthusiastic. 1812. The year in-between S&S and P&P. Exactly 200 years ago. How FUN. Ever since learning so much about Regency England, I've wanted to know more about that time period in America. The stories are set in the War of 1812 (surprise, surprise) which I've always been shockingly under-educated about even though I took a year of American History and even tried to study the war a little on my own. If I learned a lot of historical facts from reading American Girl books in the past... hey, what's to say I can't now, too? I must admit I'm looking forward to reading the books. Silly and childish (and nostalgic and sentimental) person that I am. Besides, then I can gaze at the pictures. WITH THE REGENCY STYLES.

Here she is, Caroline Abbott--isn't she pretty? :) 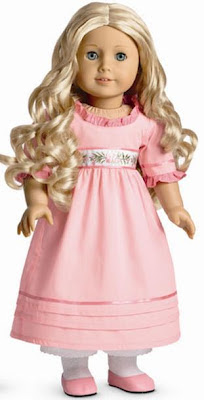 I believe I remember thinking in the past that they should have a doll/character from the 1810s. I am quite pleased.

And here are the books: 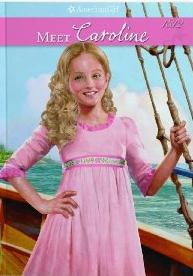 This dress almost looks Colonial, but with a higher waistline. It's very pretty, though. 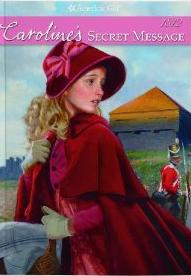 The hat is so delightfully Regency! 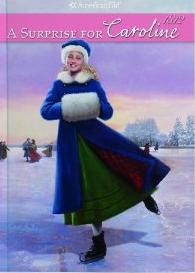 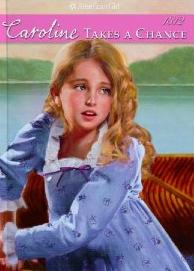 This dress reminds me a bit of Margaret Dashwood or something, heehee. 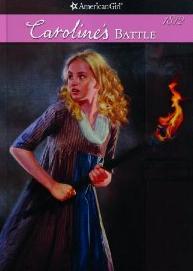 The coat thing! Is that called a pelisse, or something else? 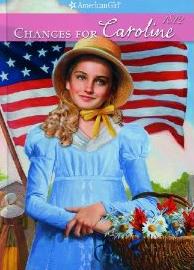 What about you? Any American Girl fans (or previous ones) out there? Am I the only silly one who's excited about this new Jane Austen War of 1812 doll?
Written by Melody 14 comments: