"It may be possible to do without dancing entirely. Instances have been known of young people passing many, many months successively, without being at any ball of any description, and no material injury accrue either to body or mind;--but when a beginning is made--when the felicities of rapid motion have once been, though slightly, felt--it must be a very heavy set that does not ask for more."


It is always a great source of satisfaction to me that my main knowledge of/experience with "dancing" is the closest possible in today's world to what Jane Austen described in her books. And it's funny, when reading particulars about balls, etc. to see how little has really changed.
Written by Melody 2 comments:

I have been reading Emma lately and find myself with lots of thoughts and quotes to share.  Instead of gathering them all up for one big post, though, I'm just going to publish them at random-- one quote per day.  It will be a lot easier on ME, and hopefully provide some diversion in your day. And hopefully, open up some fun discussion! 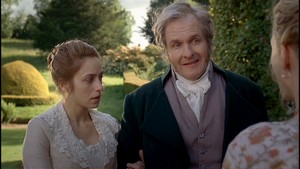 "Mrs. Weston was exceedingly disappointed--much more disappointed, in fact, than her husband, though her dependence on seeing the young man had been so much more sober: but a sanguine temper, though forever expecting more good than occurs, does not always pay for its hopes by any proportionate depression. It soon flies over the present failure, and begins to hope again."

When I'm not reading Jane Austen, I forget about these little "SO TRUE" moments that one happens upon so frequently.


"For half an hour Mr. Weston was surprized and sorry; but then he began to perceive that Frank's coming two or three months later would be a much better plan..... {etc}

"These feelings rapidly restored his comfort, while Mrs Weston, of a more apprehensive disposition, foresaw nothing but a repetition of of excuses and delays; and after all her concern for what her husband was to suffer, suffered a great deal more herself."

At long last, the moment you've all-- forgotten about?

I know, I know, I promised you all a song LONG ago, and all this time and I still haven't posted any... well, here I am, finally.

So, for anyone who doesn't know, several months ago, I took nominations and votes on a song to sing, and the one selected by the Followers was "The Rose of Tralee," a traditional Irish song.  (Incidentally, I have a lot of Irish in my background, so... hey, that works!)

Note on the lyrics: Originally the song is in first-person and sung by a guy, which was a bit... awkward. So it's been tweaked, and as a result, is not entirely grammatically correct.

I recorded the song several times and didn't realize until much later that whenever I sang words with a "P" at the beginning, I kind of... puffed... into the microphone, and Noise was a result.  But do I want to do the song over again?  Nooooo.  I don't get opportunity that often (i.e., everyone in the house has to be GONE, and it takes Time), so it is what it is.

Also, this is NOT my best singing... I'm not sure why, as the key was plenty easy to do, but I just found singing it kind of blah or something.  I don't know.  But here it is... such as it is.

Aaaaaaand-- BONUS!-- I decided to Embrace my Inner Opera Singer and sing something from Phantom!  So here is "Think of Me," which (like "On My Own" and Les Miserables) was my introduction to Phantom of the Opera, and I heard the song before I even knew of the existence of the musical.  So it's special, from the days before I was a fan.  (NOT a phan, guys.  That's just gross.)

However, of course, this is not my best singing of this song either, and although I did sing the rest of it (including the cadenza and all that), I was so ill-satisfied with it that I just cut it out entirely. Heh heh.  Somehow, when I go to record a song, my voice is just never in the right mood.  But! If I get vocal training next year, as I am hoping to do, I can re-record this song and post it for comparison like, see how much better I've gotten!

At least, that's what I'm hoping will happen. And that for now, you won't wince as much as I'm doing.

A note on the lyrics:  It has been said that Andrew Lloyd Weber changes the lyrics to this song as frequently as he changes his socks.  What I sang here is no particular one version, but rather a mixture of different ones that I liked.  (Except I forgot and sang "once in a while" instead of "every so often", which I prefer.  Sigh... oh well.)

A note on the picture: No, I do not approve of the movie version of this musical, but... the picture is pretty.  So.  Y'know.

And, for any of you who may not have heard the whole song before... do it.