Because I Must Add My Two Cents, You Know...

The blogging world is buzzing, and hardly needs me to join in, but I can't let this historical moment pass without any comment, can I? Especially when we're talking about my favorite book in the world!! 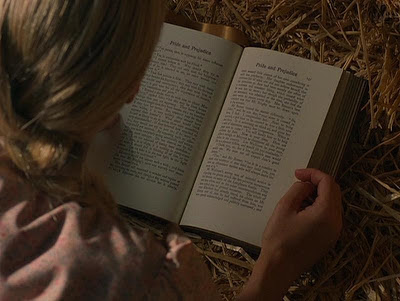 In short, Happy 200th Anniversary to Pride and Prejudice! I count myself privileged to have discovered Jane Austen in time to take part in all these bicentennials, for they really are delightful. And do not you think that the movie-makers should take advantage of this and make some movies? Mansfield Park, which needs a faithful adaptation, was published in 1814, people... HINT, HINT.

But of course today is the day to talk about P&P, not MP.
Though I may go through phases where I'm more "into" some of the other stories, I steadfastly hold P&P as my favorite. I have no wish to be obstinate and not have it as my favorite just because it is the favorite of so many... this is something where I feel that it has good reason to be a Universal Favorite. It just Makes Sense. Not that I don't think it makes sense for any of the others to be somebody's favorite... I mean, if it's by Jane Austen, it's worthy to be a favorite. :D

Presently I'm rereading P&P, so I'll be posting about that after a while... also possibly an explanation of why I like The Book's Mr Darcy (including why I like the book's Mr. Darcy better than Colin Firth's, heh heh, even though I do think his is the best representation to date). I'm also thinking of reviewing the 1940 and 1980 movies... I briefly considered doing 2005, but then discarded the idea because it wouldn't end up being a review, it would be... something else. *cough*

Anyways, instead of rambling on in this fashion, I'd just like to point you over to The P&P95Forever Club today, where you will find my main post in celebration of P&P. There is a Grand Game in honour of the day, half of which is based entirely on the book, so I encourage anybody who likes the book to take a look, even if they're not a devotee of P&P95.

And to close with, here is a bit of letter from Jane Austen to her sister Cassandra, when she was telling about getting "her own darling child" for the first time, reading it, &c.:
Miss Benn dined with us on the very day of the Books coming, & in the eveng we set fairly at it & read half the 1st vol. to her—prefacing that having intelligence from Henry that such a work wd soon appear we had desired him to send it whenever it came out—& I beleive it passed with her unsuspected.—She was amused, poor soul! that she cd not help you know, with two such people to lead the way; but she really does seem to admire Elizabeth. I must confess that I think her as delightful a creature as ever appeared in print, & how I shall be able to tolerate those who do not like her at least, I do not know.—There are a few Typical errors—& a "said he" or a "said she" would sometimes make the Dialogue more immediately clear—but "I do not write for such dull Elves

As have not a great deal of Ingenuity themselves."

I find it quite amusing that Mrs. Austen and Jane were reading P&P aloud to somebody who didn't even know Jane had written it! ;-) I wonder what Miss Benn, whoever she is, did when she found out...
Written by Melody 2 comments:

It suddenly struck me a few months ago that some of the lyrics in the lovely (and emotional) song "When I Look At You" from the Scarlet Pimpernel musical suited Anne Elliot in Jane Austen's Persuasion quite well. Not all of them, of course (especially towards the end), but some of them were remarkably well matched, I thought. So, I thought to myself, "Hmmm... I think I feel a fan video coming on."

And here it is.  I've uploaded it to YouTube but I figured it would be good to share it with you here as well. :)

The song is from the TSP musical... I must say I don't care for the voice of the person who sings it, but I only had two options and in the end I went with this because it sounds less modern. (Even this one has a bit of percussion in it which annoys ME anyways, but it cannot be helped.)

Something Of an Outrage

I remember how thrilled I was getting my very own DVD copy of Emma (2009). I am a frequenter of libraries, and never actually set out to buy a movie or book for myself unless I reallyreallyreallyreally like it. (Or want it very much and the library doesn't have it.) As it is, I got this one with a gift card someone gave me from Walmart. Obviously I had to order it online, and I was so pleased when I went to pick it up.


Then after a while I read the back cover, and was extremely shocked to see something... 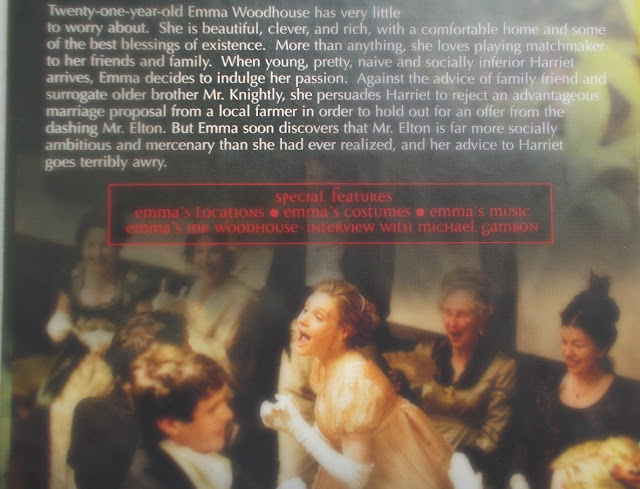 Do you see it? "Mr. Knightly," right there on the back cover of my favorite adaptation of Emma.
OF ALL THE NERVE.
Well, it probably wasn't nerve.
OF ALL THE STUPIDITY.

Honestly. Now, if you have been spelling it "Knightly" and not knowing the difference, don't take offense. I used to do that, in fact... and then I learned that it was actually Knightley and was quite horrified at myself for ever having gotten it wrong. And anyway, Knightley just looks nicer. Knightley is a surname... knightly is a word.

However. It is beyond my comprehension that anyone who is admitted the pleasure of writing the back cover of a true-to-Jane-Austen version of Emma could not know how Knightley is spelled. Anybody with me on this? Is not it horrendous?

It actually rather amuses me at times to see people who think they know so much about Jane Austen... for instance, in The Bedside, Bathtub and Armchair Companion to Jane Austen, which I've flipped through once or twice, said "Pemberly." (It's Pemberley, peeps. What's up with missing the E's? E's are very nice. Use them. And whatever you do, don't say "Austin." Fortunately I've never seen that one on anything supposed to have been written by someone who Knows. :P) Or P&P spinoffs that say "Lizzie." The subtitles of the 2005 version (read that word very begrudgingly) also said "Lizzie," but that, you know, did not really surprise me. It's just in keeping with the general inaccuracy of the thing. Pleasedon'tkillmeP&P05fans.

I tend to like to rant about these things, in case you can't tell... but I'll have to end it now because it's time for dinner. ;)

P.S. In case you don't know what I was getting at up there about the Lizzie, it's Lizzy. With a Y. According to Jane Austen. And she knows, you know. :D
Written by Melody 19 comments: 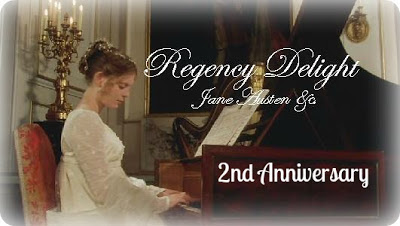 I have been blogging for two entire years today.
Wow.
In some ways it does seem like that long, and in others it doesn't. But in any case, it is so.

Last year I posted about the general story of my blog, so I won't bother with all that again. I will, however, do some updated statistics (because those are fun), and a short overview of what I've done this blogging year.

Blog events...
Guest posted for two mentioned above, also helped in the recent Jane Austen Birthday Assembly, and hosted a Fanfiction Contest on this blog.


And now of course I must thank all you dear followers and friends who make blogging so delightful. :) I think this next year is going to be a good one.

In honor of the New Year and the anniversary, I've redone the blog design. (Also because I needed to change it from Christmas.)
Happy New Year everyone!

P.S. Check out my new blog button on the sidebar!
Written by Melody 8 comments: