This is my last odds-and-ends post for the day.
If all goes according to plan, I shall be starting posts on Northanger Abbey next week. 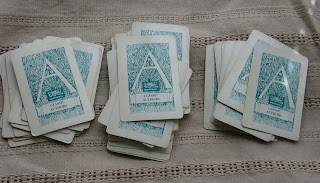 Well, there’s this little game that I’ve been playing quite a bit lately, mostly with my sister (and usually my niece joins in). I don’t remember how it came up, but some of my family started talking about this game – I guess I was too young to play when it was popular with them before – and when my dad mentioned Jane Austen was in it, of course I had to seek it out. There it was, not even buried or anything, in the game closet. 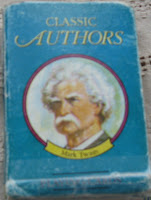 The box is so worn-out you can see it has been used a lot!
The game is actually rather easy – sort of like Go Fish, except more interesting, of course. And I know it nearly by heart now – give me a book in the game, and I could tell you who wrote it; name one of the authors, and I could tell you a few books by him.

My sister and I are always trying to get certain authors – the “desirables” – Jane Austen, of course, is top priority. If you get her set, you win the game. (Well, not really, but that is a little joke between us.) 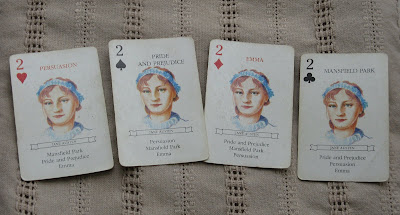 I’m not sure why they think she looked like that – in particular the hair color – but oh well. At least she’s in there! In the newer games she’s left out – can you believe it?!
If I would have been choosing the books, I’d replace Mansfield Park with Sense and Sensibility – I think it’s just as well-known, if not more so.
For quite a while when I first started playing this, I hardly EVER got her – it was very odd. But I’m catching up. =)

Here are some more desirables – 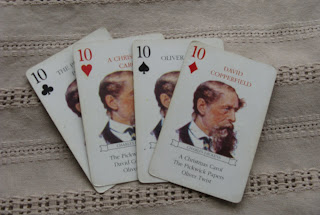 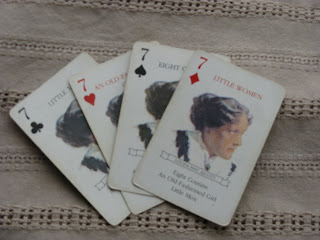 And especially Louisa May Alcott, because she’s one of the only two women authors In the game.

Which is why I replaced one with… 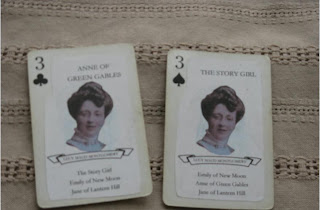 L. M. Montgomery. The name of the author originally there as well as all his books but one were hard to pronounce (because they were French), and we never hear of that author anyways. So I covered up “weird black-haired dude” or “Bald Zach” as we jokingly called him (the latter because of his last name – Balzac) with a ‘girl author.’ I made the card things myself on the computer, and used rubber cement to glue it on. It sticks well, but also peels off nicely without damaging the original cards. 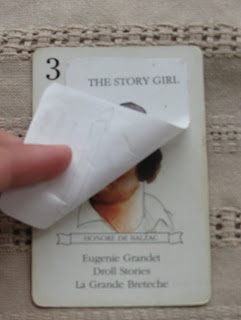 I might replace them with the Bronte Sisters or Elizabeth Gaskell later.

After playing the game so many times, we started to nic-name some things; change the titles slightly, etc. just for fun. Here are the ones that have to do with Jane Austen: 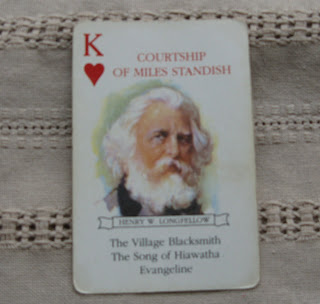 For this one, we copy Harriet from the 2009 Emma and say “ ‘Shipcourt’ of Miles Standish”. Tehe. 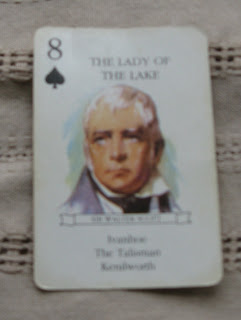 Instead of ‘Sir Walter Scott’ we often say ‘Sir Walter Elliot’; the father's name in Persuasion.
Sir Walter Scott lived while Jane Austen did – they were actually around the same age. He admired her works – I think she must have admired his as well, since she quoted him quite a bit. 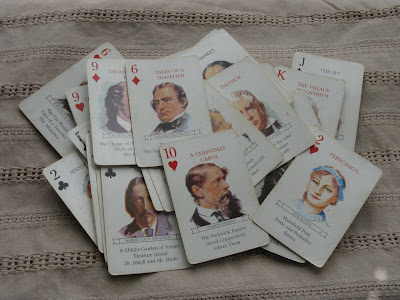 I want to have an edition of The Authors card game just like that! We own one, but if I remember correctly, the only authors are men. But it's such an enjoyable game to play.

What fun! This game sounds delightful! I love playing games with my sister, especially card games because they are easy to play and store away (easier than board games).
The authors included are great! I enjoy Shakespeare, Austen, Stevenson, Alcott, Scott, Tennyson, Dickens, Twain and Longfellow. Irving and Hawthorne are interesting too but I can't remember why just now. You were very clever to cover Balzac with L.M. Montgomery!
Your silliness of nicknames and made up rules is quite like me and my sister. We have lots of fun being silly together! :)

Jemimah,
That is a pity! All the ones I've seen at least have Louisa May Alcott...but I can never figure out why they'd have her instead of Jane Austen, unless it was just American authors...but it's not.
It is very enjoyable. And educational! ;-)

Miss Laurie,
Sisters are great to be silly with! =) Thank you for your lovely comment! And I'm glad you condone my Balzac-covering-up. haha

Thanks for the comments you two. :)

Ah, yes! That was my favorite game in bygone days. :-) It is good to see that it is still being put to good use.

This sounds like such fun! I'm also amused by the fact that the Marches, Laurie, and the guests from England all play "Authors" at Camp Laurence in Little Women. I'm willing to bet that Louisa May wasn't in the game at that point, though. :)

Miss Dashwood,
Really? I wonder if it was similar? I haven't read Little Women yet...but I will, I will! It's one of the top few on my reading list! =)
Haha, maybe in her imagination. ;-)

Was this the first post I commented on, on your blog????? Now I'm quite curious and must check the timestamps...

Whether it was the first or not, it's still cool to think that less than two years later, I'd be playing that very game with you, same cards and all... wow.