So, I generally try to stay away from controversial topics...

Ahem.  Well, see, it was suggested I write this week about Why I Don't Like P&P 2005.  Y'all know that's the case but I try not to be too detailed about that because I know I have readers who do like it and I have no wish to annoy anybody.

Also, a post is in the works for the P&P95Forever Club blog which will be an official P&P05 bashing.  Ha.  But I won't do that here... in fact, I'm not going to give you all the reasons I don't like this version because there are kind of a lot and I don't want to get carried away.  So I'll just go with the main reason-- I find it Inaccurate To Jane Austen's Novel.

Which I suppose requires further explanation.  In a nutshell, these are the particulars, not in any special order:

~The time period in general is inaccurate.  I could go into detail about what I mean, but I don't feel like bothering, so let's just say even the makers say they meant to set it in the late 1700s.  Pride and Prejudice was published in 1813-- they were about twenty years off, and you can definitely tell.  (Some may argue that this makes sense because Jane Austen started writing the novel in the 1790s, but I will argue back that that doesn't make much of a difference-- she started working on Pride and Prejudice in 1811.  She was writing a thing called First Impressions earlier, and this wasn't just editing, it was revision.  And updating.  Therefore, the book is supposed to take place when it came out.  The end. :D)
Besides for having the wrong time period, I think they give it a distinctly modern feel, and for me that Will Not Do.

~The script isn't even trying to be like the book.  They had to change everything.  And add things.  And take other things out.  I don't expect any adaptation to be word-for-word from the book all the time, but really, they could have done better.

~There are too many made-up scenes and additions to scenes that are not at all Janely.  Haha.  For instance, Mr. Darcy stalking Elizabeth in the rain and then proposing to her.  (I could write an entire post on what was wrong with the proposal scene-- well, both of them, actually-- but I don't feel like going there.  Just don't get me started.  Okay?)  Wandering around outside in your nightclothes... nooo.  No way.  That did not happen back then.  Lady Catherine randomly showing up late at night?  The list can go on, but I think you get my point.


~A lot of the characters and actors just did not seem true to the book to me.  I'm trying to keep personal preference out of this, but it's hard.  Mr. Bennet was not humorous enough, Mrs. Bennet was too... normal... people ran around yelling things like "YOU CANNOT MAKE ME"... Mr. Bingley was a complete buffoon... Elizabeth sometimes acted like a slightly less stupid version of Lydia.  Many characters in some form showed lack of propriety that was not acceptable back then.  Georgiana was too young and child-like.  The list goes on... and on...

Side-ish note: Just look for pictures from this version.  There are hardly any in which Elizabeth is smiling or laughing or looking... Lizzy-ish.  Most of them are just like this: 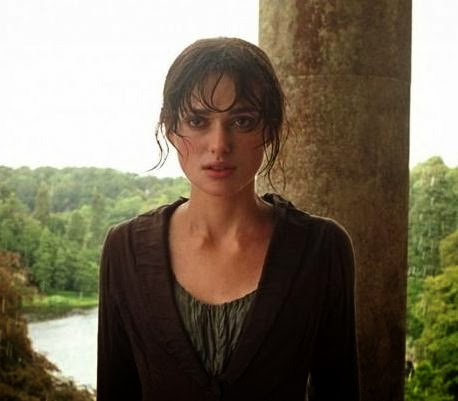 ~It was too short to get enough of the story and had to leave things out.  Including characters.  Elizabeth did not go to Hunsford to visit Charlotte by herself, she was going with Charlotte's father and sister who... were never even there in this movie, I think?  There is another Bingley sister... as well as her husband...

~They took the Bennets to be poor in a literal sense.  They were not poor.  They were still properly genteel, it's just that they weren't rich by the upper-middle-class standards, and Mr. Bennet did not have much money to leave his family.  But the girls would not wear those drab dresses all the time. Their place of abode would not look like a dilapidated farmhouse, and speaking of farms, though the Bennet family sort of had a farm it was run by the tenants and would have been a good distance from their actual house.  (Longbourn was actually a very small village owned by Mr. Bennet, people.)  There would not be chickens and pigs running around.

Like I said, that's just a rather brief overview of the ways I consider the adaptation to be inaccurate to the book... other things such as how I just don't think it has the same feel as the book are more matters of opinion, I suppose.  And I must save some of my juice for that bashing. ;) 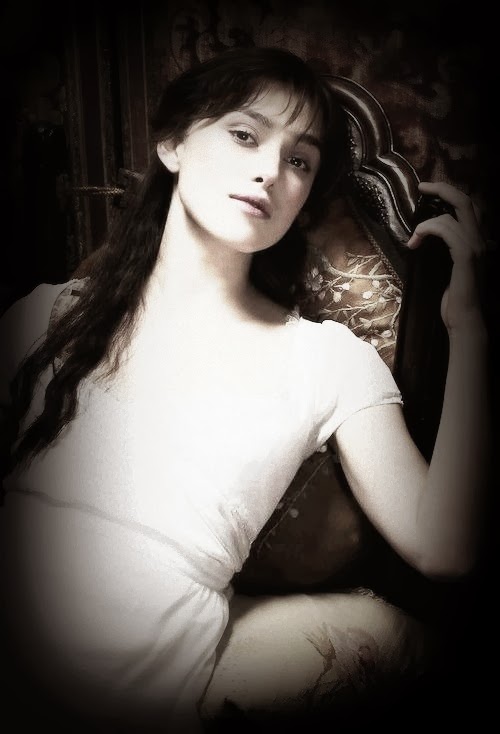 Saw this picture and thought it was just asking for Gothicizing. :P
Written by Melody

"Distinctly modern feel" Hmmm, I wonder where that came out the most. Maybe in the bare feet and people walking around in their NIGHTCLOTHES. ARGHHHHHH! That right there is what bothers me the most about the movie. I can enjoy it as a period drama because it is so NOT Pride and Prejudice that it is laughable to consider it as such; therefore it doesn't even offend the dignity of the real film, it is so off the charts that I can enjoy it as a movie EXCEPT for those stupid parts. DON'T they know how much of a scandal all that would cause!!!! And maybe some of the movies was set in the late 1700's, but for some reason somebody told me it was set later than P&P, so it seems a grand collision between those two wrong periods plus the modern period.

Yes, about the poorness. Don't dumb it down producers. A gentleman's daughter is not poor, actually much lower classes were not poor. The Bennets were in the upper levels of society in terms of rank since the middleclass had not fully emerged then.

"Bewitched me body and soul" Okay innuendo there, and what is this TWILIGHT?! That cat face applies to the whole movie if anyone tries to pitch it as P&P

Some acquaintance of ours said the Meryton Assembly looked like a bar. Another (or maybe it was me) said Lizzy looked like tomboyish Jo March in the beginning (Keira Knightly does look freakishly like Winona Ryder) Georgiana was embarrassing. I felt SORRY for Mr. Collins. People, you do NOT feel sorry for Mr. Collins. And Willoughby is NOT supposed to be even close to being ashamed of himself (he is in this movie). And Jane is not a ditz. Some people think Mr. Bingley crinkles his nose like a bunny. And the almost crying not Darcy. And goddess divine line? Oh, dear me this is a post in itself. And like you I could go on.

Couldn't agree with you more!!!!

BAHAHHAHAHAHA the grumpy cat picture. Didst thou make that, m'dear? It's brilliant. :D

Basically ditto to everything in here. Eheehehehehee. Also Keira Knightley's eye makeup annoys me excessively. She looks like a dead raccoon.

Oh, and great point about Longbourn being a village and the farm being tenanted out elsewhere... so few people seem to realize how that stuff worked. (Not that I thought you didn't. Just that P&P fans in general don't seem to know that.)

I AGREE! It is more as if they are following Keira Knightley rather than Elizabeth Bennet and the others. I love the book though! I mean, how could you not, it is a classic!

Also, I love your blog very much and have added your link to my "Favorite Blogs" section. Hopefully you'll check my blog out! @ http://tunefuljourneys.blogspot.com

Another thing- I find it utterly boring. In fact, I tried to watch it a second time, and couldn't get through it. Just because I couldn't remember how that version went from the first time I watched it years ago.
The farmhouse thing really annoyed me, though, I recall that. ha And the ugly dresses, etc.

I nominated you for The Sunflower Blogger Award, but please don't feel pressured to participate if you don't really want to do so.

I love your argument about why Pride and Prejudice should be set in the Regency Era! I had begrudgingly accepted that it did sort of make sense, but I like your point much better!

I agree about the "distinctly modern feel." Love the Grumpy Cat picture. Totally agree on your points about the Bennets' wealth and status. There are just so many reason to despise this movie. ;)

Livia already nominated you for the Sunflower Blogger award just above, but I'd like to add my nomination... I'd be delighted if you'd add my questions to your post, if you do decide to participate! Also, if you wouldn't mind, please drop the link to your post in the comment section of my post. http://hopefulaspiringhomemaker.blogspot.com/2014/03/sunflower-blogger-award.html

Oh my goodness! Livia Rachelle and I keep nominating the same people for the Sunflower Blogger Award! Anyway, I nominated you too, and you can read my post here to learn more. Play if you want to!

Hi! I nominated you for the Sunshine Award (http://regencynovel.blogspot.com/2014/03/the-sunshine-award.html). I'm not pressuring you to do it if you don't have time...just thought I'd let you know. =)

Hi Melody, I nominated you for the Sunflower and Sunshine blogger awards. Here is the link: http://cowgirlandadream.blogspot.com/2014/03/ive-been-nominatedtwice.html

that is just what I think! I agree with you 100% and I loved grumpy cat pic!
hehehe
NO!

I follow your blog, but somehow I missed this post until now. :-( It's absolutely fantastic! And I can't wait for the "official bashing" one. ;-) I've seen it twice now and my sister has once. The thing she pointed out on the pacing is that somehow it manages to drag and rush along at the same time. :-) And dear me, yes. Line changes, personality changes, status changes, gentility, dress!, the list could go on and on... :-)

I can't tell in words that I am thinking of you.
You are in topics of Jane Austen, for now, my soul mate. Don't think ugly, in methaphoric talk.

I am so agree with you in this, my fav is 95 version, and I hate when people call Darcy the perfect men.

Wow! i was thinking that I was the only. And no.
Ana.
Do you see The Lizzie Bennet Diaries.
And I can not see Lost in Austen. I don't like it.