Pride and Prejudice: The Actors

When I watch movies (mostly BBC or other British old-fashioned films in this case) I have fun spotting actors I have seen on other things. So, just for fun, here is a list of the actors/actresses on versions of Pride and Prejudice I have seen elsewhere.
(Character from P&P--Character on other movie(s)---actor's name)
1980 mini-series
Elizabeth Bennet - Diana Rivers on Jane Eyre (1997) [Elizabeth Garvie]
Charlotte Lucas - Elinor Dashwood on Sense and Sensibility (1981) [Irene Richard]

Jane Bennet - Philippa Gordon on Anne of Avonlea (BBC) [Sabina Franklyn]
1995 mini-series
Elizabeth Bennet - on The Russel Girl [Jennifer Ehle]
~I got this movie from the library because I wanted to know what on earth an English actress was doing on an American Hallmark film. Turns out she's actually from America. I didn't really like the movie - rather depressing.

Mr. Collins -  Mr. Lush on *Daniel Deronda, the minister on Pollyanna (BBC) and I saw him on Miss Potter. [David Bamber] 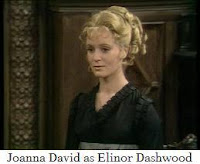 Georgiana Darcy - on David Copperfield (1999) (as his mother) [Emilia Fox]
Mrs. Gardiner - Elinor Dashwood on Sense and Sensibility (1971), Bleak House (2005)  [Joanna David] ~It was interesting to see her so much younger on S.&S.!
Mrs. Forster - Henrietta Musgrove on Persuasion (1995) and I saw her on Lark Rise to Candleford. [Victoria Hamilton]
*2005 movie 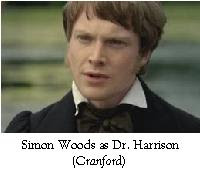 Mr. Bingley - Dr. Harrison on Cranford [Simon Woods]
~Much better without that crazy red hair!!
Any of those movies you have or haven't seen? Any good ones you have seen that I have not? I'd love to get comments from you! :)


(* means I haven’t actually seen it (or all of it); therefore I may not approve of it, but I always hear about that person being in that movie, or may have recognized them from the portions I saw.)
Written by Melody

I like to watch for actors and actresses I've seen in other BBC films too. After you watch a bunch of them, you really starts to pick them out.

For Jennifer Ehle being in an American movie, I think she is American; her mother is English, but her father is American. I think she was born in North Carolina. Hope that answers your question : -)

Ah, I see. But I think that most the movies on the list I saw were British. So what's her real accent? American or English? o.O

I was never quite sure. I remember seeing the video of her accepting the BAFTA award for Pride and Prejudice, and she sounded like she had a English accent. But in this video on Youtube, she sounds like she has an American accent.
http://www.youtube.com/watch?v=SGEjW01oGOU

Hmm. Yes, that's what she sounded like on the other movie I watched. It was around the same time, too. Perhaps she just puts on whatever is appropriate for the occasion!

I do this as well! When I'm watching a period drama, there are always one or two characters I have seen in other period dramas - which reminds me of the fact that I have seen way too many of them, haha.

There's another character that I can add to your list, the Mrs. Gardiner of the 2005 film (Penelope Wilton) plays Mrs. Crawley in Downton Abbey! I've seen her in lots of other period dramas as well, like South Riding.

Oooh, and Penelope Wilton (Mrs. Gardiner in de fake) was Mrs. Hamley in W&D, too.