Pride and Prejudice: The Movies 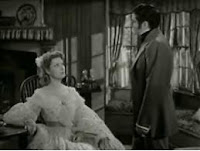 1940 film (MGM)
Elizabeth Bennet’s first appearance on the screen! The story is condensed (no visit to Pemberley!) and changed - Mr. Darcy is less proud, Lady Catherine less cruel. The costuming was Hollywood’s version of clothing in the mid-1800s (my guess is 1840s or 50s). Despite its faults, I enjoy this vintage film. This was actually my first introduction to Pride and Prejudice! Greer Garson as Elizabeth and Laurence Olivier as Mr. Darcy. 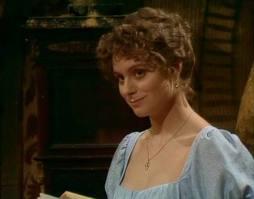 1980 mini-series (BBC)
The BBC period films from the 70s and 80s are usually very close to the story, but slow-moving and rather like a play. This one held my attention better than the others, though, and I like it. I especially liked Jane. Elizabeth Garvie plays Lizzy, and David Rintioul the rather expressionless Mr. Darcy. 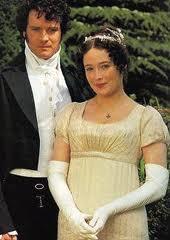 This version is the favorite, I believe, of most true Jane Austen fans. It follows the story faithfully; many of the quotes are straight out of the book! It captures the spirit of Jane Austen’s novel quite well. I thought the movie was 2 ½ hours long, but I guess that was just for one disc. Later, people told me it was 5 hours long, and I didn’t believe them, it had been so interesting the whole time (and I didn’t watch it all at once).The soundtrack is delightful. Jennifer Ehle and Colin Firth made an excellent Lizzy & Darcy, and the rest of the cast did a wonderful job as well.
If you have not seen this  version, you are really missing out!!! 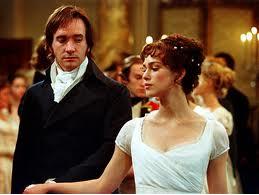 The newest, preferred by those who enjoy movies with a more modern feel. I am not quite a historical fashion expert, but I’d say they made the time era in the late 1700s or very early 1800s…not Regency. The waists are a bit lower, some of the men have those triangle colonial hats, and Lady Catherine looks very 1700s. Personally, I found the way the characters were portrayed to be rather colorless after seeing the 1995 version. The story is more altered than in the BBC versions. Starring Kiera Knightly and Matthew Macfadyen.


Some people include Lost in Austen when they are comparing Pride and Prejudice movies, but I think a movie that twists and messes up a wonderful story is worse than irrelevant. And further, I do not approve of adding things that Jane Austen would not approve of and are un-authentic to the time period. I have not seen it myself, as I watch nothing rated higher than PG. I have heard enough of it to dislike it intensely.

In case you couldn’t tell from reading the above, my favorite movie of Pride and Prejudice is definitely the one from 1995. Here is the only tolerable trailer-like thing I could find - a promo from when it was on Masterpiece Theatre. I wanted to make one myself, but I had no way to.


I would love to know which is your favorite!

My favorite is definitely the 1995 miniseries. I love how they included Jane Austen's humor in it. The acting was wonderfully done!

1995 is SO much better. Matthew Macfayden so butchers Mr. Darcy's not handsome enough line. Ugh!

Thanks for your votes & comments, everyone. :-)

Charity, I agree!! And "barely tolerable" is so much more of an insult than "tolerable", in my opinion. ;-) It has a completely different meaning!

Hello Melody!!!
So glad to have you following my blog!!!
Yes I do love JA movies!!!
Who is your favorite Dashwood Sister? Mine is Mariann.

I'm glad to have you following mine, as well! :-)
I like all the sisters from S&S! (Or are you talking about the blog called 'The Dashwood Sisters'? haha)And I wish there was more about Margaret! 2 of the movies left her out completely...1 of them made up some interests of hers that weren't in the book...the book says she was rather like Marianne. :-)
I admire Elinor, and I am a little like Marianne. I have never decided on a favorite...they are so different, so I think of them differently. ;-)

Hello Melody!
Yes I was talking about the S&S sisters. I follow the Dashwood Sisters Blog and Read there entrys alot!! Im even friends with Elinor Dashwood on there!
I Like the way Marianne is so Ongoing. I also like Elinor.

Hope to hear from you soon!!

hi, i'm new, my name is Lydia, i'm not really a member, but, i look every time i can.
i am Marianne Dashwood, i love Jane Austin, and have watch like 3 J.A movies, Emma, (don't know what version)Sense and Sensebillity (if that's how you spell it), and Pride and Prejudice (2005) i have started to watch the 1995 version of Pride and Prejudice. i have read 7 books of J.A's on my kindle, and am reading Persuation right now.
i don't know what version is my favorite in Pride and Prejudice, since i've only read one version.
Au Revouir (i hope that's how you spell that, i'm a novus in French!)

I've never seen the P&P movies before the 1995 version. Hm....i agree with you that the 1995 movie is more acurate to the book, and the characters are a bit more acurate to the book as well. However, I think the 2005 version captures a bit more feeling and brilliancy. Perhaps, this is because of the amazing cinemetography. Elizabeth's character was a bit more harsh and saucy in this version, but i think the 1995 version didn't capture the characters' realness. Mr. Darcy was rather stale and stone-faced.

The 2005 movie is not for me an adaptation of the book, I don't feel like the book. The center of the movie was only the love history, not the ironial, the sense of humor, or the good characters.
It is only my opinion.
Ana

I have been looking for a very long time to find the score of a piano piece that Mary plays in the 1995 movie. I want to learn to play it.
Can someone please tell me more about it? I believe it was written for the movie and is not a vintage classical piece.

It is played Disk 2, Episode 6-chapter2 titled: A mistake in Pride 7 minutes into the video, 1 minute from the end.

You hear it as a piano solo that is almost background music shortly after Lydia and Mr Wickham leave for their honeymoon.

I have the audio version of it but need it as a score for piano.

I like the 1995 series because of Colin Firth, he cannot be beaten as a Mr. Darcy! That series is also of a good length which includes many details left out in 2005. HOWEVER, upon watching the 1995 series over two days I did find that Lydia and Mrs. Bennet were rather annoying and difficult to bear after some time. I much prefer the Mrs. Bennet and Lydia in the 2005 version.