"At present, I ask only to hear, once to hear your voice."

I know, Amy and I were rather terribly silent whilst she was at my house.  We did not give you any amusing tales of weird guys in malls and so forth.  To try and compensate, here is our podcast.  And you shall hear my voice for the first time ever. ;)
Muwahahaha.

***UPDATE***
We watched Les Mis again after this podcast was recorded, and I decided that I would actually pick Courfeyrac.  Because his emo-ness pleased me.  And he's nice.  And he doesn't seem as much of a dweeb as some of the others. :P  (Even if Amy did just call him a total goof.  He's not a TOTAL goof.  Mind, I don't know much about him since I haven't read the book.  But in the movie he was the one I felt I'd get along the best with.) 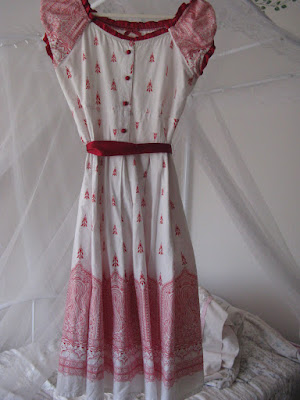 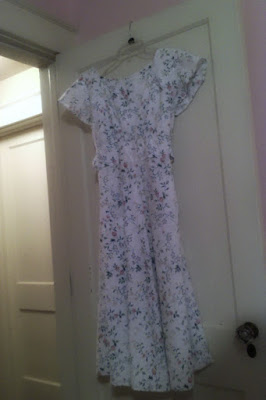 My favorite dress of Amy's.  Oddly enough ,the same one she chose... hmm. ;)
Written by Melody

Yeah, I think I love Courfeyrac best, too, because his relationship with Gavroche in the movie is SOOOOO cute. I just can't get over it. I have not, however, seen the entire movie/musical OR read the book. Shameful, I know :) I do not like Marius or Enjolras too much. I mean, they're OK, but they're neither of them really my kind of guys . . .

Basically, what I know about Les Mis I know from binge-listening to clips of the anniversary concerts on YouTube, binge-watching selected clips from the movie (also on YouTube), and reading, like, the first 5 chapters of the book. (I was gonna try to read it all, I really was, but then I started writing a novel and I ran out of time. Maybe some day . . . )

I loved this podcast!!! I had indeed been waiting most impatiently to hear your voices (although I cannot tell your voices apart at all. Hard. :-))

HAHA. I have to admit I was secretly 'judging' your British accents. But they are pretty good, so well done. =) I had to laugh about the high/low voices and your giggles are rather contagious. :-)

Thank you very much for answering my questions. You two are so alike, there's no clear 'who's more that' answers!

AND OF COURSE I KNEW YOU WERE TALKING ABOUT JANE AUSTEN. Goodness, I knew it before you even started talkihg. 'Pride and... um? I forgot the title.' Hahaha.
Amy, I'm there with you about heights. Sooooo scary. *huuuuhhh* (By the way, Miss Dashwood, this comment is also for you. That's the problem, I never know which blog to comment on when you post two of the same ones. :-) I went with commenting here because Amy's post had more comments already. :-P)

Thank you for doing this!

So I'm going very shortly, but I had a spare minute here and I thought I’d tell you that I’ve listened to this. And, ya know, enjoyed it. You two are hilarious. You should go on stage. ;)

I'll tell you my thoughts on the SQUEE IT'S YOUR VOICE part later, haha. When I have more time. But of course I was squee-ing in my head throughout. :P

Naomi,
Hahahahahahaha, oh dear. Well, I can tell our voices apart REALLY easily when only one of us are talking, but when we're both trying to talk at once... sometimes I'm like "wait, which one of us said that?" In real life, though, I think it would be pretty easy to tell us apart. :)

ooh! I don't remember talking in a British accent on purpose. Where'd we do that?

Yeah, the who's-more-than questions... haha. You could get a few where it would be more distinct. But not many. ;)

Yes, we figured most people would know we were talking about JA. ;)

Thank you for commenting on mine because it had less comments, haha. That was very kind of you. ;)

Sophie,
:D
We really should. We should BOTH run away to New York and pursue the stage, that's what. Heehee. ;)

I'm looking forward to your squee'es. :D I wish I could hear youuuur voice... I'm sure it would be much more interesting than mine. :P (Was the accent at all like you expected?)

Yeah, I'm sure it's easier to tell you apart 'in real life' (obviously because I can see the person, heehee.)

Naomi,
Haha... well we were TALKING about British accents but we didn't actually talk in one. :) Not at that point anyway!

Hahahahaha, Naomi, that's how we always say "how about no".... I guess I never thought about it being "posh British" before but I guess it is kind of a mimicry of that! Funny!

This was so fun and sweet! Hahaha, Melody, I loved your "if you don't know who Jane Austen is then get off my blog right now." heehee :D

Those dresses are so pretty!