Book Review: Among the Innocent by Mary Alford 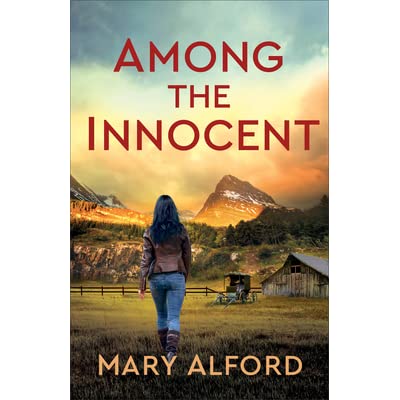 The main five things I look for in a novel are likable and authentic characters, engaging dialogue, a tolerable plot, and a smooth narrative. Today I’ll be reviewing Among the Innocent by Mary Alford, and I’ll examine each of these points in their order of importance.

“When Leah Miller's entire Amish family was murdered ten years ago, the person believed responsible took his own life. Since then, Leah has left the Amish and joined the police force. Now, after an Amish woman is found murdered with the same MO, it becomes clear that the wrong man may have been blamed for her family's deaths.

As Leah and the new police chief, Dalton Cooper, work long hours struggling to fit the pieces together in order to catch the killer, they can't help but grow closer. When secrets from both of their pasts begin to surface, an unexpected connection between them is revealed. But this is only the beginning.

What will it mean for Leah--and Dalton--when the full truth comes to light?”

One. Are the characters likable?

I liked the main characters in Among the Innocent. They weren’t the most interesting and developed characters ever, but I was rooting for them and they weren’t idiots. Well, Leah’s constant theme of “no, you should totally let me be involved in this even though I’m absolutely in extreme danger, and this is just making it easier for the killer, but see, I want to” did get a bit old, I’ll admit.

Two. Are the characters authentic?  (Are they realistic? Can you empathize with them?)

Plot is #4 on my list for a reason… it can be as compelling as you want, but if the characters are one-dimensional, the whole book is going to fall flat. As far as the authenticity of Leah and Dalton, I felt that it was middling. As usual for a woman author who jumps back-and-forth between the perspective of male and female main characters, the girl did seem more real. The driving force of her past made a lot of sense; Dalton’s didn’t as much. There is a reveal mid-book that makes you understand it a bit more, but my thoughts on that are better saved for the plot analysis.

I did think the romance between the two main characters seemed a little contrived. Is this the only person of the opposite gender that they’ve met who is nice, honest, and seems to have a good heart?  Respect for another human being doesn’t generally create chemistry or attraction unless a person is out looking to fall in love, which was not the case with either of these characters. I can see that their backgrounds would make them identify with each other, but again, it doesn’t necessarily follow that they should fall for each other. I did, however, appreciate the lack of ogling the girl’s beauty or swooning over the guy’s muscles.

One of the perspectives, interspersed here and there, was that of the villain. I understood why that was in there for the plot’s sake, but it did feel a little odd. We aren’t meant to understand or sympathize with the villain– he’s just plain messed-up– and having his perspective sometimes felt forced and awkward.

Three. Is the dialogue realistic and engaging?

Four. Is it a good plot?

The plot was the main reason why I chose this book. While I used to be an avid reader of Beverly Lewis, at some point I grew tired of Amish fiction. This synopsis caught my eye, though. A murder mystery set in Amish country? Sure, I’ll bite.

I will concede that this book was quite the page-turner, which I very much enjoyed. I did end up predicting a number of the plot points that were supposed to be a big reveal– whether this means it was predictable or I’m just really good at figuring stuff out, I’ll leave you to surmise.

Some of the choices didn’t make a ton of sense to me, especially waiting until the middle of the story to reveal a certain detail about Dalton’s past. I feel like we could have had more sympathy for the character if we’d known earlier, but as it is, his motives just seemed a little off for most of it.

While it certainly wasn’t right up there with Agatha Christie, the plot was sufficiently intricate to keep me engaged and not disappoint me at the end, so…

Five. Is the narrative smooth and not distracting? (A.k.a., is it well-written?)

First of all, the book had several typos (misplaced quotation marks, that sort of thing) which made it feel rather unprofessional. Beyond typos, there were bits of the narrative that I had to read several times to correctly put the emphasis on the right part of the sentence and understand it, and that’s not something I normally have to do. As an English BA, I found myself rewording the sentences in my head in a way that would make them much clearer. (Perhaps this criticism should be more directed to the editor and less to the author.) Then, as far as preference goes, Alford seemed very fond of purposely incomplete sentences. Those annoy me. Annoy me a lot. Seem lazy.

However, I have read much worse. So I’m going to say…

That brings my rating of the book to a total of 3.5/5, although for Goodreads I will round it to 4/5, because I really did enjoy it.

Note: I received a copy of this book for free in exchange for this review as part of the Revell Reads Blogger Program. I was not required to give a positive review.