It's been longer than I meant it to be, but here we are with photos from Day 2 of our England trip. 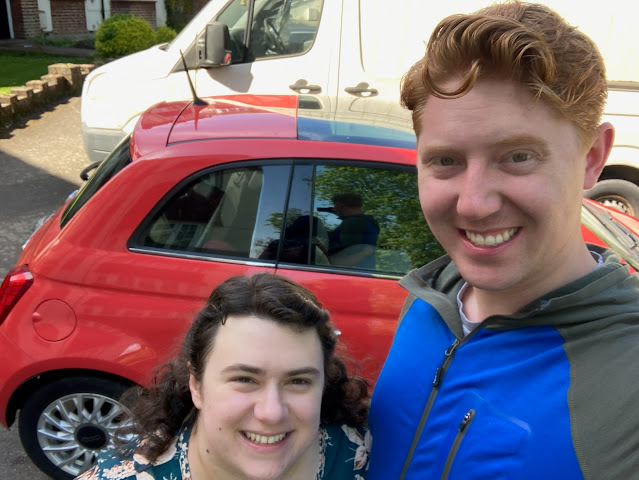 Picking up our little Fiat 500 rental! 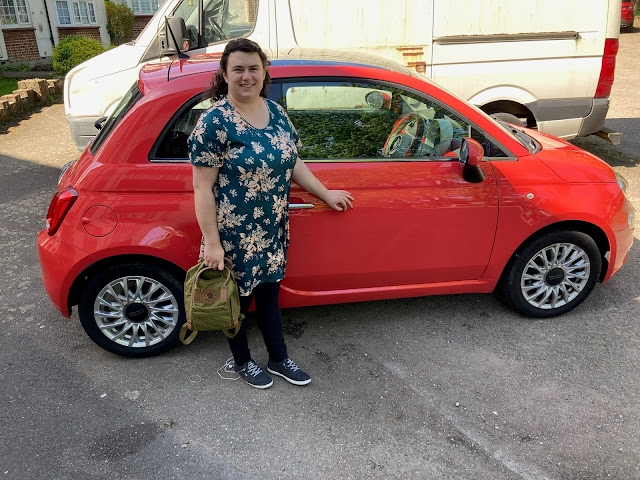 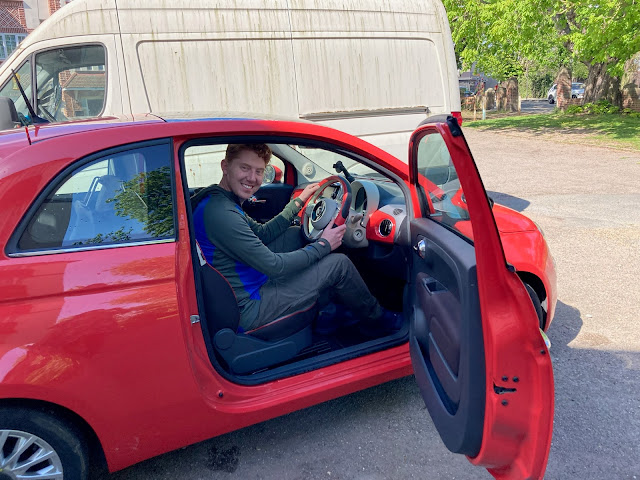 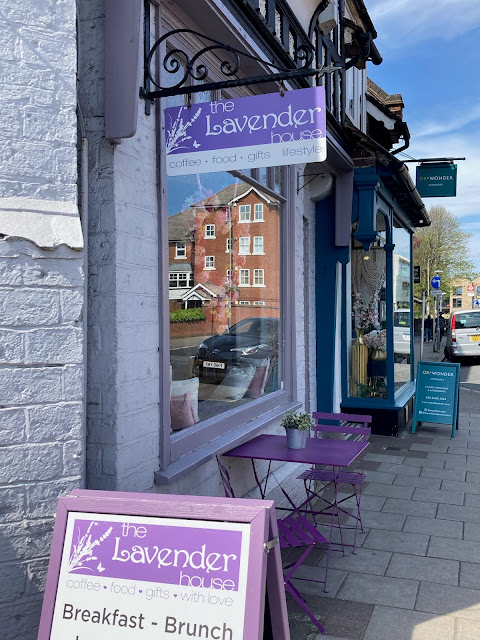 A lovely little tearoom where we stopped for some late breakfast. Isn't it adorable? These kind of places are all over the place in England! 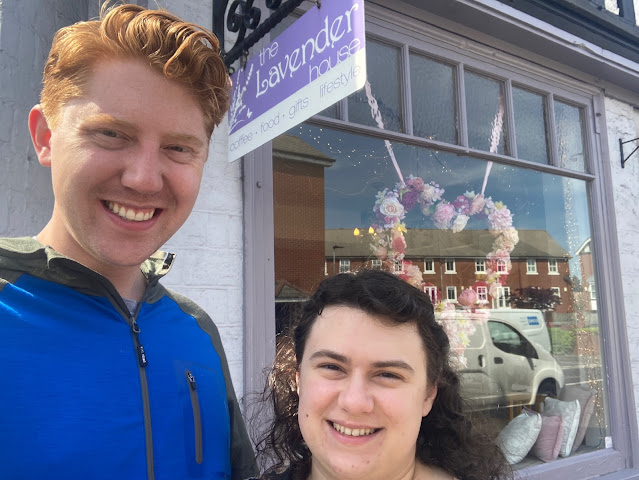 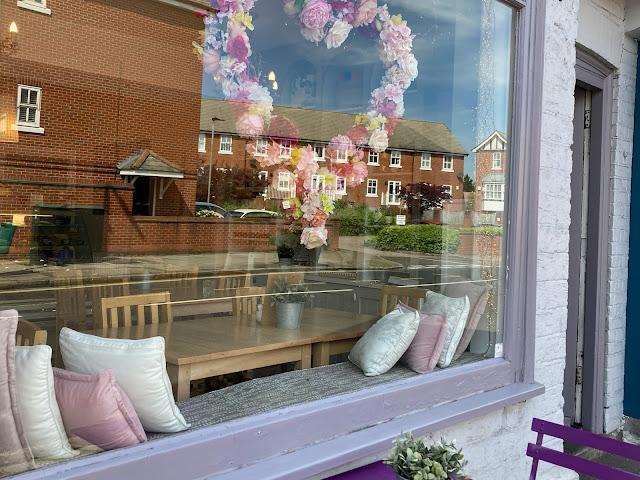 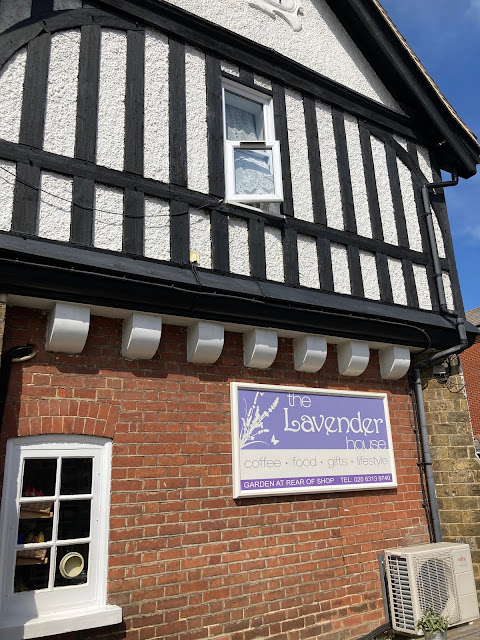 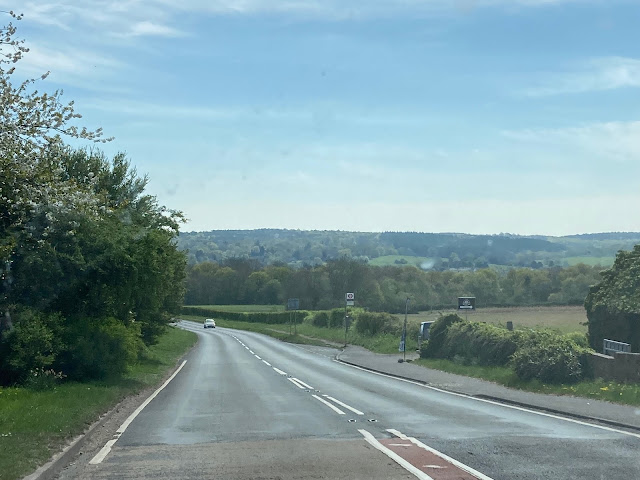 Some lovely countryside. Pictures through the window of course do not do justice to the wild elation we both felt at seeing the landscapes. I knew England was pretty, of course, but seeing it in person is just so different than seeing it in movies.

As we drove along through Kent headed toward East Sussex, we passed a sign pointing to "Squerryes Court." The name sounded strangely familiar to me. I looked it up quickly, and sure enough, I confirmed that it was the location of Hartfield in my favorite 2009 adaptation of Emma. I had read that it wasn't a place open for tours, but since there was a sign pointing toward it, we turned around in case we could at least catch a glimpse of it. 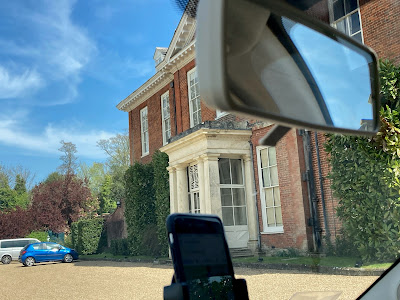 We pulled into a little parking lot here. "Is this it...?" I was saying, and then realized it was probably the back of the building. We got out and looked through a side gate. I was terribly excited. The gate was unlocked. There were other people parked there. There were no signs saying not to go in. 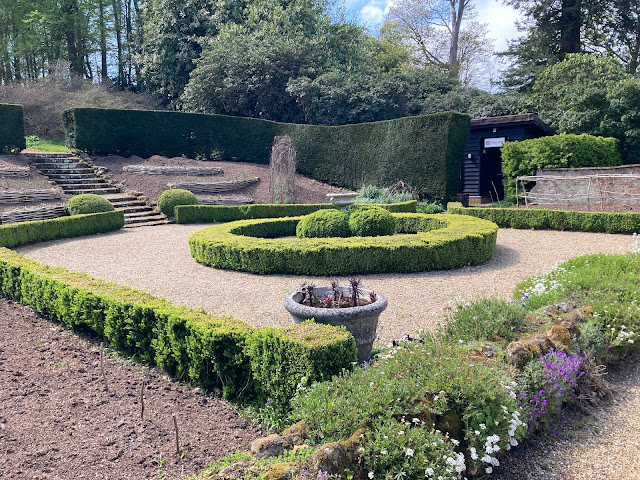 Cautiously, we opened it and walked into the front garden. There was a gardener working who seemed very unperturbed by our presence, as if random people wander in not infrequently. So we politely and quietly walked round to the front of the house, took some pictures, and skedaddled. 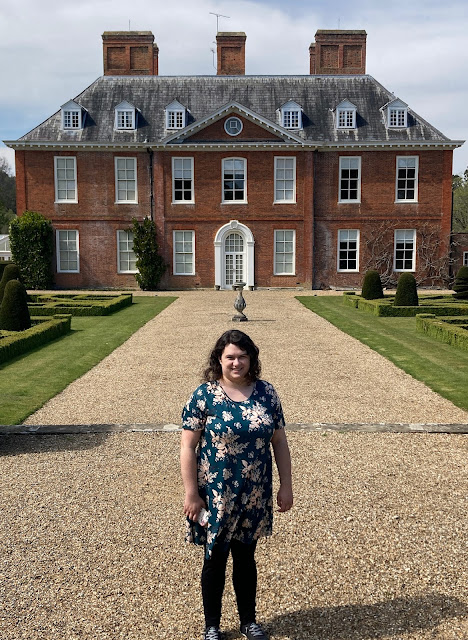 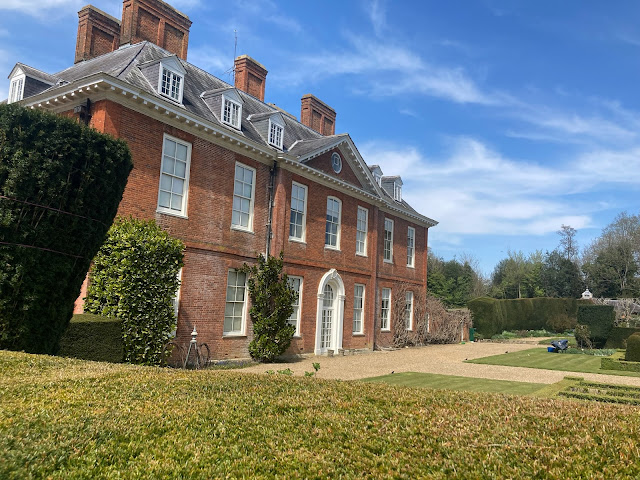 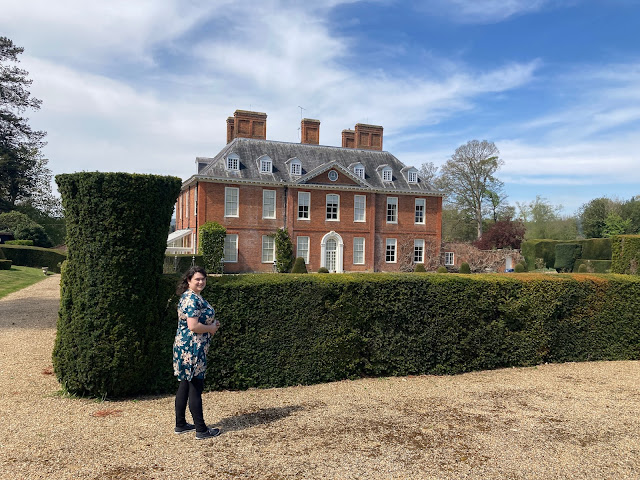 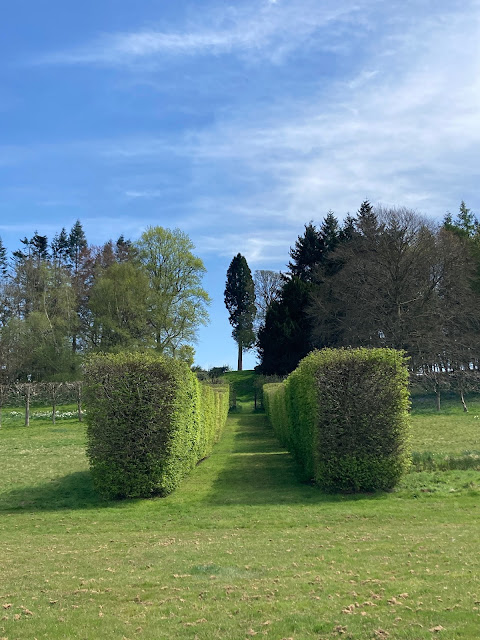 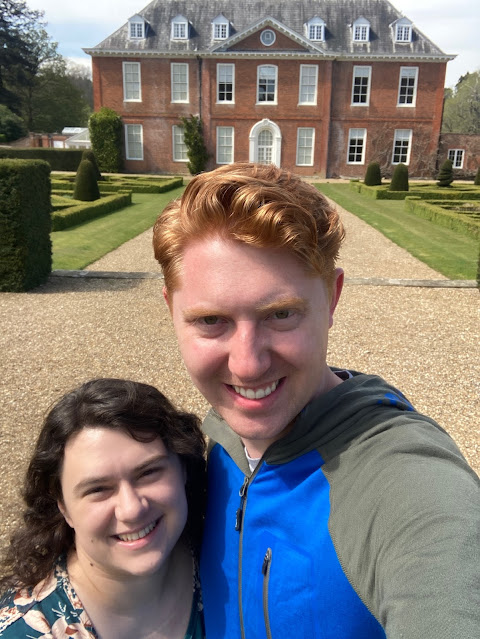 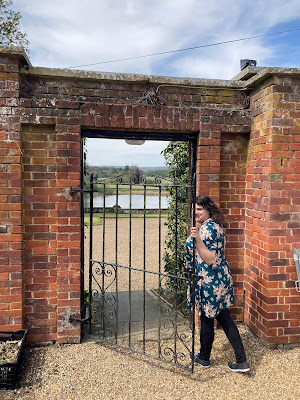 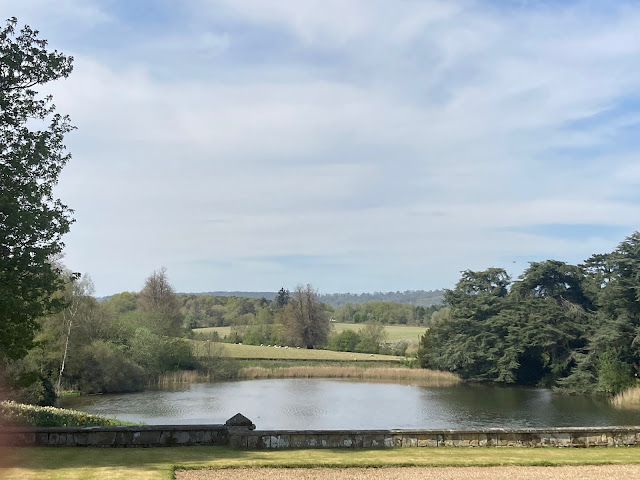 The view in the back-- also featured in Emma.
I loved our brief adventure. It was my first example of how really cool things just pop up and surprise you in England. 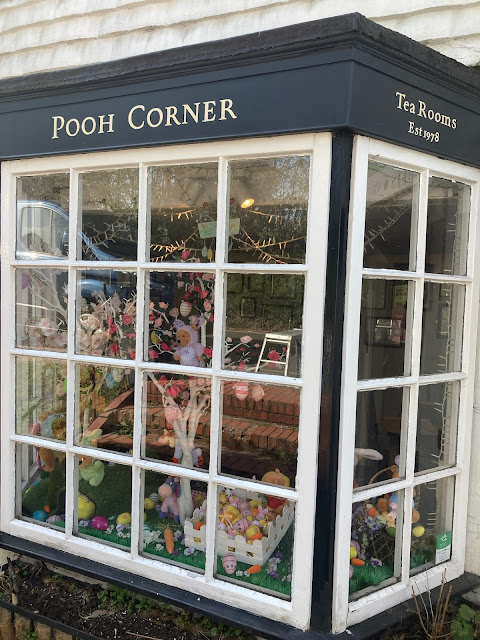 Our next stop was Pooh Corner in Hartfield, East Sussex. (Yes, the town is called Hartfield, just like the house in Emma, haha.) 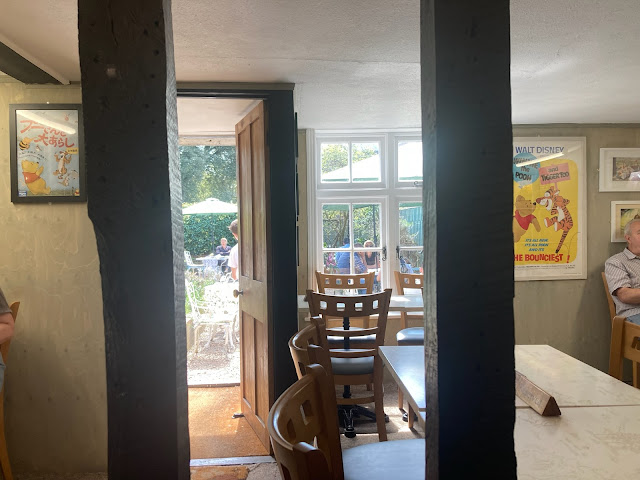 It's a lovely little spot with a tearoom, a gift shop, and a "Pooh-seum." 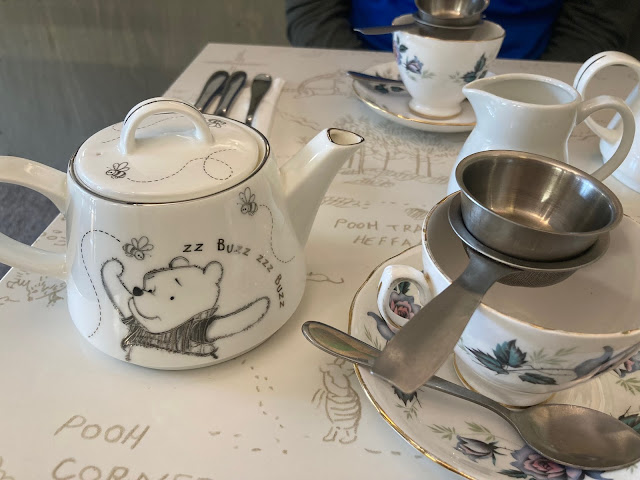 Look at the adorable Pooh teapot! And the table itself had a map of the Hundred Acre Wood. 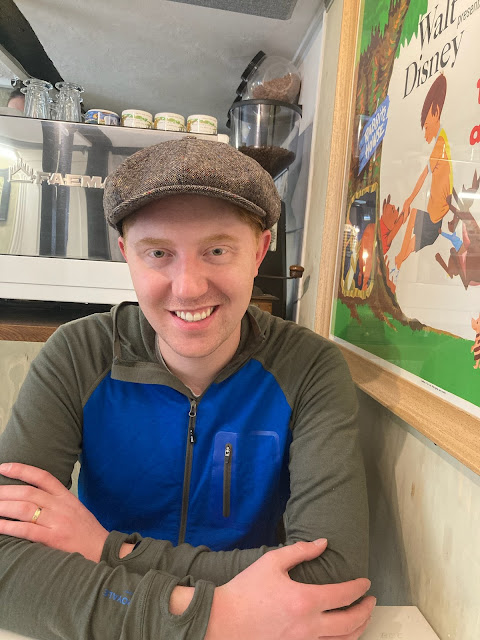 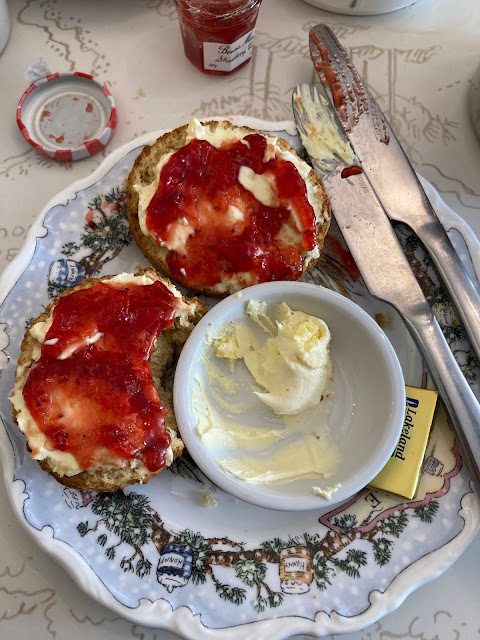 Our first scones in England! Clotted cream is the way to go, friends. 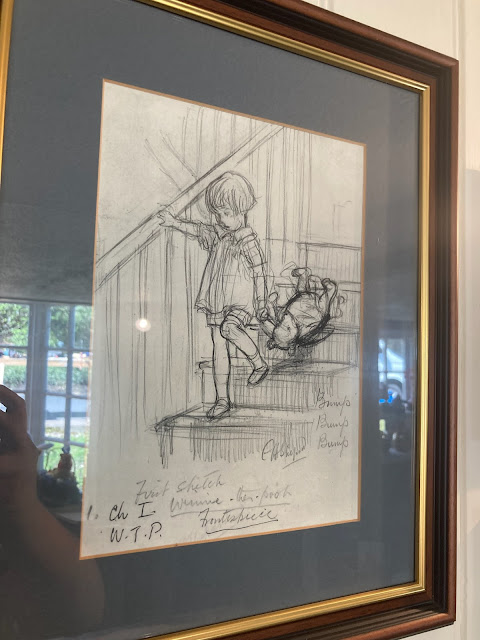 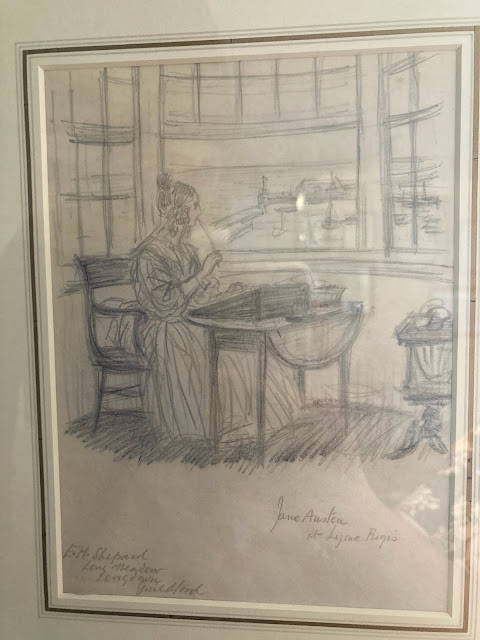 And then to my sudden surprise, I found this sketch of Jane Austen, imagined sitting at a writing desk next to the window at Lyme Regis, also by E.H. Shephard. The illustrator of my favorite childhood stories drawing a picture of the author of my favorite teen and adult stories... worlds collide, indeed! (Never mind that the sketch looks more 1830s than 1810s.) 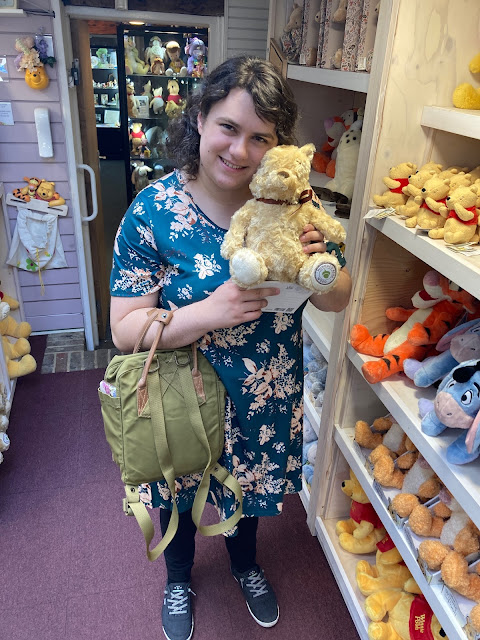 A realistic reproduction of Winnie the Pooh. :) 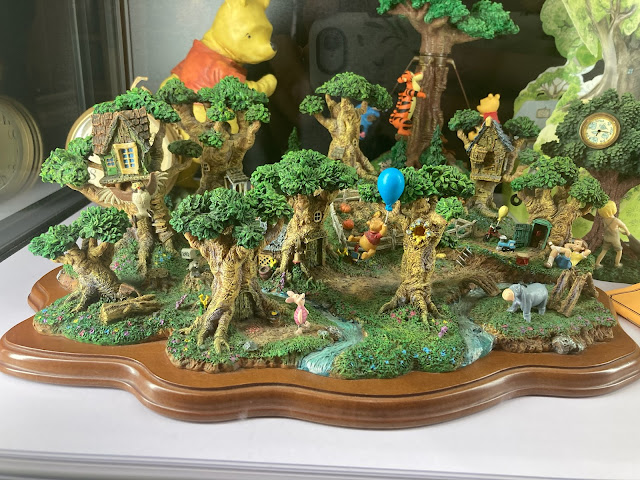 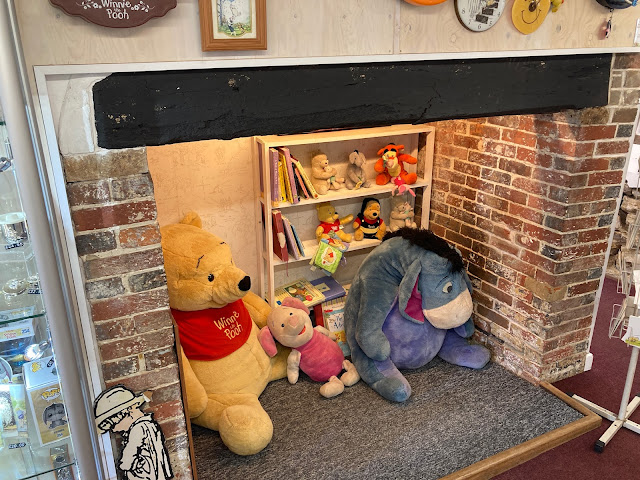 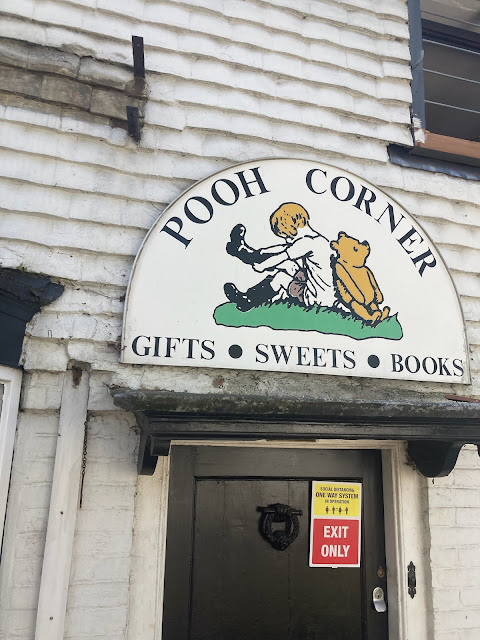 The building itself is said to have been a little store at the time when A.A. Milne lived here, which the Milnes would sometimes visit. 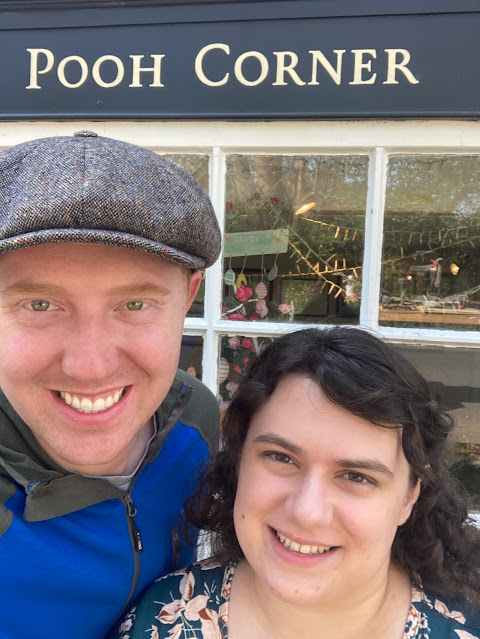